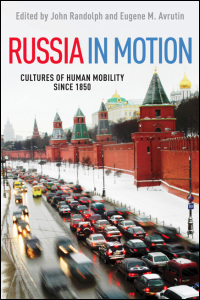 Since its rapid imperial expansion in the seventeenth century, Russia's politics, society, and culture have exerted a profound influence on movement throughout Eurasia. The circulation of people, information, and things across Russian space transformed populations, restructured collective and individual identities, and created enduring legacies. This volume represents the latest discoveries of scholars attempting to rediscover this experience, and to understand its lasting meaning for today.

These gathered essays tell a broad range of stories, involving a remarkable cross-section of historical actors: imperial visionaries, stage-coach entrepreneurs, religious pilgrims, tourists, disability activists, and metropolitan police, among others. The book illuminates three major themes: the role of human mobility in Russian governance; the processes by which people decide where and how to move; and the political and cultural power of different kinds of movement.

A strong contribution to our understanding of the history of Russia and the Soviet Union, this volume offers new models of research for historians, sociologists, political scientists, and others who are seeking to integrate the study of human mobility into their work.