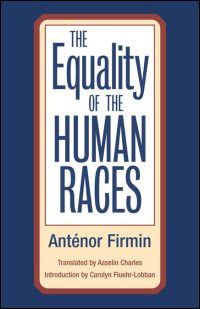 This is the first paperback edition of the only English-language translation of the Haitian scholar Anténor Firmin's The Equality of the Human Races, a foundational text in critical anthropology first published in 1885 when anthropology was just emerging as a specialized field of study.

Marginalized for its "radical" position that the human races were equal, Firmin's lucid and persuasive treatise was decades ahead of its time. Arguing that the equality of the races could be demonstrated through a positivist scientific approach, Firmin challenged racist writings and the dominant views of the day.

Translated by Asselin Charles and framed by Carolyn Fluehr-Lobban's substantial introduction, this rediscovered text is an important contribution to contemporary scholarship in anthropology, pan-African studies, and colonial and postcolonial studies.

Anténor Firmin (1850-1911) was born and educated in Haiti. He studied law and held several political offices before being posted as a diplomat to Paris, where he was admitted to the Societé d'Anthropologie de Paris and wrote De L'Égalité des Races Humaines. He later returned to Haiti and served as minister of finance, commerce, and foreign relations. Asselin Charles teaches literature and journalism at Wenzao College of Languages in Taiwan. Carolyn Fluehr-Lobban is a professor of anthropology and the director of general education at Rhode Island College.

"Although a reclamation of Anténor Firmin's erudite scholarship is long overdue, this translation of his late nineteenth-century book could not have been made available at a more opportune time–-at the start of a new millennium when the problem of racism persists worldwide in both old and new guises. This foundational text in critical anthropology points to the importance of expanding the scope of the discipline's history to engage neglected works that activist, anti-racist, and racially-subordinated intellectuals contributed."--Faye V. Harrison, professor of anthropology at the University of Tennessee at Knoxville