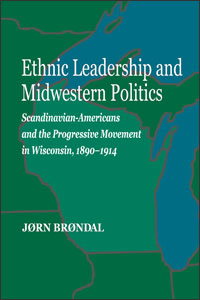 Ethnic Leadership and Midwestern Politics investigates the notion of ethnic identity as it relates to Scandinavian Americans and political affiliations in Wisconsin, from 1890-1914. Jørn Brøndal traces the evolution of their political alliances as they move from an early patronage system to one of a more enlightened social awareness, prompted by the Wisconsin Progressives led by Robert M. La Follette.

Brøndal's exceptionally thorough research and cogent arguments combine to explain the workings of a political system that accorded nationality a major role in politics at the expense of real political, social, and economic issues in the early 1890s, and how (and why) the Progressives determined to change that system. Brøndal explains the change by looking at several important Scandinavian-American institutions, including the church, mutual aid fraternities, the temperance movement, the Scandinavian-language press, political clubs, and labor and farmer organizations, showing how these institutions impacted the construction of a nascent sense of Scandinavian American national identity and made a lasting mark on the Scandinavian-American role in politics.

Jorn Brondal teaches history at the University of Southern Denmark.