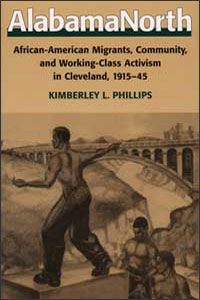 Langston Hughes called it "a great dark tide from the South": the unprecedented influx of blacks into Cleveland that gave the city the nickname "Alabama North." Kimberley L. Phillips reveals the breadth of working class black experiences and activities in Cleveland and the extent to which these were shaped by traditions and values brought from the South.

Migrants' moves north established complex networks of kin and friends and infused Cleveland with a highly visible southern African American culture. Phillips examines the variety of black fraternal, benevolent, social, and church-based organizations that working class migrants created and demonstrates how these groups prepared the way for new forms of individual and collective activism in workplaces and the city. Giving special consideration to the experiences of working class black women, AlabamaNorth reveals how migrants' expressions of tradition and community gave them a new consciousness of themselves as organized workers and created the underpinning for new forms of black labor activism.

Kimberley L. Phillips is former Frances L. and Edwin L. Cummings associate professor of history and American studies and co-chair of the Lemon Project Committee at the College of William & Mary. Her books include War! What Is It Good For? Black Freedom Struggles and the U.S. Military from World War II to Iraq.

Winner of the Richard L. Wentworth Prize in American History, 1999.