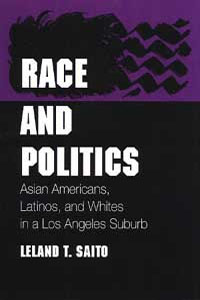 Located a mere fifteen minutes from Los Angeles, the San Gabriel Valley is an incubator for California's new ethnic politics. Here, Latinos and Asian Americans are the dominant groups. Politics are Latino-dominated, while a large infusion of Chinese immigrants and capital has made the San Gabriel Valley the center of the nation's largest Chinese ethnic economy. The white population, meanwhile, has dropped from an overwhelming majority in 1970 to a minority in 1990.

Leland T. Saito presents an insider's view of the political, economic, and cultural implications of this ethnic mix. He examines how diverse residents of the region have worked to overcome their initial antagonisms and develop new, more effective political alliances.

Tracing grassroots political organization along racial and ethnic lines, Race and Politics focuses on the construction of new identities in general and the panethnic affiliation "Asian American" in particular.

Leland T. Saito is an associate professor of sociology at the University of Southern California. He is the author of The Politics of Exclusion: The Failure of Race-Neutral Policies in Urban America.

Winner of the Book Award given by the American Sociological Association Section on Asia and Asian America.