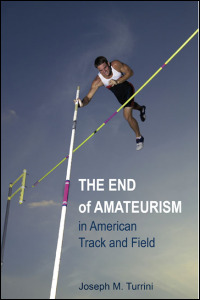 The End of Amateurism in American Track and Field

This unique sports and labor history charts the revolutionary transformation of track and field over the past thirty years. In this time, the sport has changed from an amateur effort whose governing bodies unfairly controlled its athletes' lives to a professional arena in which athletes have the power to make decisions in their own best interests. While historians have chronicled labor history in team sports such as baseball and football or have lumped track and field into larger studies of Olympic history, Joseph M. Turrini is the first to scrupulously detail the efforts of athletes to reorder labor relations in track and field and to end their decades-long power struggle with governing bodies.

Combining social and institutional history and incorporating the recollections of the athletes and meet directors on the front lines, The End of Amateurism in Track and Field shows how the athletes thoroughly transformed their sport to end the amateur system in the early 1990s--changes that allowed the athletes to market their potential, drastically increase their earning possibilities, and improve their quality of life.

This book reveals how athletes in the 1950s began to harness the courts, legislature, and little-known underground labor relations systems that grew within the sport to untangle the distribution of power and decision-making by the 1990s. Enlivening the narrative with stories such as runner Wes Santee's battle with the Amateur Athletic Union and revelations about the actions of college coaches and rivalries between the NCAA and AAU, Turrini examines the effects of amateurism on athletes and explores how changes in the economic context of track and field and the role of the government helped leverage the end of the 100-year era of amateur track and field.

Joseph M. Turrini is an assistant professor of library and information science at Wayne State University.

"The End of Amateurism in American Track and Field is as much a page turner for track fans as it is a compelling read as a business book."--Running Times

"This historical rendering of the rise and fall of amateurism in track and field reads like a novel, with the reader cheering on the athletes in their struggle to overturn the AAU and gain the freedom of athletic self-determination."--Oral History Review

"In an era in which athletes in all sports can earn fame and riches beyond most of our wildest imaginations Turrini usefully skewers the romanticized image of the amateur ideal."--Journal of Sport History

"Joseph M. Turrini's superb The End of Amateurism in American Track and Field helps to fill in one prominent gap in the existing literature on the subject. . . . A gem of a book."--Sport in History

"Broadly conceived and thorough in its analysis, The End of Amateurism in American Track and Field examines the power relations in track and field and shows how track athletes successfully negotiated labor issues. Joseph M. Turrini offers heretofore uncovered stories and events in track and field that help explain the inner workings of sport as social and political institutions."--David K. Wiggins, author of Glory Bound: Black Athletes in a White World