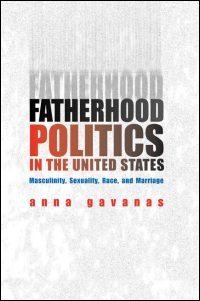 Fatherhood Politics in the United States

Are fathers being marginalized in the contemporary family? Responding to fears that they are, the self-proclaimed "fatherhood responsibility movement" (FRM) has worked since the mid-1990s to put fatherhood at the center of U.S. national politics. Anna Gavanas's Fatherhood Politics in the United States analyzes the processes, reveals the internal struggles, and traces the myths that drive this powerful movement.

Unlike previous investigations that rely on literary or other secondary sources, Fatherhood Politics works from primary ethnographic material to represent a wider range of voices and actors. Interacting with and interviewing members of the most powerful and well-known national fatherhood organizations, Gavanas observed Promise Keeper rallies, men's workshops, and conferences on masculinity, fatherhood, and marriage.

Providing a detailed overview of the different organizations involved and their various rhetorical strategies, Gavanas breaks down the FRM into two major wings. The "pro-marriage" wing sees marriage as the key to solving all social problems, while the "fragile family" organizations worry about unemployment, racism, and discrimination. Gavanas uses her extensive anthropological fieldwork as the basis for discussions of gender, sexuality, and race in her analysis of these competing voices.

Taking us inside the internal struggles, tensions, and political machinations of the FRM, Gavanas offers a behind-the-scenes look at a movement having real impact on current social policy. Fatherhood Politics is an essential work for anyone interested in the politics of masculinity, parenthood, marriage, race, and sexuality.

Anna Gavanas is currently a Marie Curie Fellow at the University of Leeds. Her articles on fatherhood movements have appeared in edited volumes and several scholarly journals.