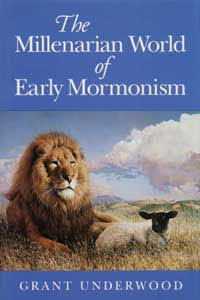 The Millenarian World of Early Mormonism

The most detailed study yet of early Mormon thought about the "end times," The Millenarian World of Early Mormonism shows how early LDS interpretation of the Bible and the Book of Mormon affected, and was affected by, Mormon millennial doctrines. Grant Underwood provides the first comprehensive linkage of the history of early Mormonism and millennial thought, reassessing Mormonism's relationship to the dominant culture and placing Mormon millennial thought in the broader context of Judeo-Christian ideas about the end of the world.

"A model of first-rate scholarship and balanced interpretation; it has much to say not only to those interested in Mormon history but also to anyone seeking to understand the role of millenarian ideas in the American experience." -- Michael Barkun, Journal of American History

"No serious student of early Mormon history should fail to read this book." -- L. B. Tipson, Choice

"A signal contribution to Mormon studies. Anyone who wishes to explore the core of the Mormon identity in the nineteenth century will have to come to terms with this book." -- Richard T. Hughes, author of Reviving the Ancient Faith: The Story of Churches of Christ in America