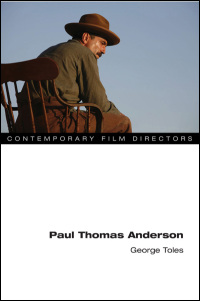 Since his explosive debut with the indie sensation Hard Eight, Paul Thomas Anderson has established himself as one of contemporary cinema's most exciting artists. His 2002 feature Punch-Drunk Love radically reimagined the romantic comedy. Critics hailed There Will Be Blood as a key film of the new millennium. In The Master, Anderson jarred audiences with dreamy amorphousness and a departure from conventional story mechanics.

Acclaimed film scholar and screenwriter George Toles approaches these three films in particular, and Anderson's oeuvre in general, with a focus on the role of emergence and the production of the unaccountable. Anderson, Toles shows, is an artist obsessed with history, workplaces, and environments but also intrigued by spaces as projections of the people who dwell within. Toles follows Anderson from the open narratives of Boogie Nights and Magnolia through the pivot that led to his more recent films, Janus-faced masterpieces that orbit around isolated central characters--and advance Anderson's journey into allegory and myth.

George Toles is Distinguished Professor of English at the University of Manitoba. He is the author of A House Made of Light: Essays on the Art of Film.