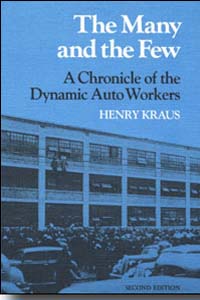 The Many and the Few

The Many and the Few recounts the dramatic "inside" story of one of the pivotal strikes in American history. For six weeks in 1937, workers at General Motors' Flint, Michigan, plant refused to budge from their sit-down strike. That action changed the course of industrial and labor history, when General Motors finally agreed to recognize the United Auto Workers as the sole bargaining agent in all GM plants. Through it all, UAW activist Henry Kraus was there.

Henry Kraus is the recent recipient of a MacArthur Foundation fellowship and the author of several books on medieval art history. He now lives and works in Paris.

"The Many and the Few has been an essential source for any study of the 1937 sit-down strike in Flint. Kraus was not only a participant in the sit-down but was also an excellent observer of the UAW during its formative months and years. Communists and Socialists were the shop floor cadre of the CIO drive and it seems appropriate, therefore, that a radical close to those events be one of the historians. Kraus is a good writers and his work has the kind of immediacy and excitement that will hold the interest of students in undergraduate American history surveys and in more specialized labor history courses."-Nelson Lichtenstein, author of Labor's War at Home: The CIO in World War II