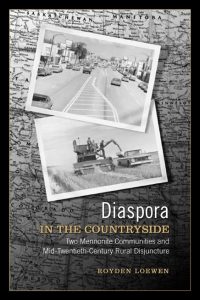 Diaspora in the Countryside

From the 1930s to the 1980s, the North American countryside faced a profound cultural transformation as rural society became fragmented and dispersed. Nowhere was this more true than among close-knit, ethnoreligious communities such as the Mennonites. Farm families were required to accept new levels of automation and science, while those unwilling or unable to make these changes migrated to nearby towns or regional cities. Some escaped the transformation in new isolated rural places. These relocations and the cultural reformulation that resulted saw the emergence of an extra-ordinary diaspora of rural people.

In Diaspora in the Countryside, Royden Loewen examines the phenomenon of rural fragmentation by contrasting two closely related but geographically distant Low German Mennonite communities in Kansas and Manitoba. He systematically compares their responses to the “Great Disjuncture,” as well as the changes undergone by their farm families versus those of their kin in the nearby towns and the cities of Denver and Winnipeg, and a conservative group that moved to rural British Honduras.

Royden Loewen is a professor in the Department of History and chair of Mennonite studies at the University of Winnipeg. He is the author of Hidden Worlds: The Mennonite Migrants of the 1870s and other books.

"Loewen's study shows how vibrant cultures can pour old wine into new wineskins. . . . As Loewen shows, in the hands of a flexible people, sixteenth-century social/biblical traditions can still speak to twenty-first century situations."--Montana The Magazine of Western History

"Loewen . . . offers a comparative sociological study of post-WWII changes in two areas with a large Mennonite population. . . . Dust bowls, snowdrifts, greater dependence on federal assistance, modern scientific farming, and urbanization had a profound impact on both communities. . . . All of these and other changes make for fascinating reading. . . . Recommended."--Choice

"Employing environmental, gender, ethnic, and rural history, Loewen has created a satisfying social history of value to many readers."--Journal of American History

"Loewen's book provides a nice case study, and is well written and accessible to all readers. . . . For the interested general reader the book provides a clear window into rural life as it struggled with the turbulence of the mid-twentieth century."--Kansas History

"Roy Loewen is constructing a record as the most innovative historian in the Mennonite and Amish world."--Annals of Iowa

"A rich cultural history that tells a compelling story of how change came to southern Manitoba Mennonites in the 1940s, 50s, and 60s."--Great Plains Quarterly

Loewen’s work represents an important contribution to our understanding of the radical changes that occur when a people moves from the countryside to the city. This is especially relevant in a global environment that is witnessing the breakdown of traditional farming communities.”--American Historical Review