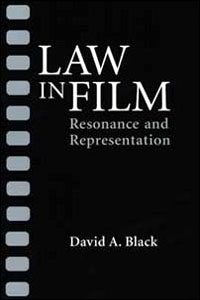 The courtroom, like the movie theater, is an arena for the telling and interpreting of stories. Investigators piece them together, witnesses tell them, advocates retell them, and judges and juries assess their plausibility. These narratives reconstitute absent events through words, and their filming constitutes a double narrative: one important cultural practice rendered in the terms of another.

Drawing on both film studies and legal scholarship, David A. Black explores the implications of representing court procedure, as well as other phases of legal process, in film. His study ranges from an inquiry into the common metaphorical ground between film and law, explored through "the detective" and "the witness," to a critical survey of legal writings about the cinema, to close analyses of key films about law. In examining multiple aspects of law in film, Black sustains a focus on the central importance of narrative while also unearthing the influences—pleasure in film, power in law—that lie beyond the narrative realm. Black's penetrating study treats questions of narrative authority and structure, social authority, and cultural history, revealing the underlying historical, cultural, and cognitive connections between legal and cinematic practices.

"Cogent, clear, and compelling, Law in Film will certainly bring a new perspective to film studies."—David Desser, editor, Cinema Journal"Black's engaging treatments of the link between law and film are apt in an age that seems to be wrestling with the power of film documentation and camera as witness."—John Brigham, author of The Cult of the Court