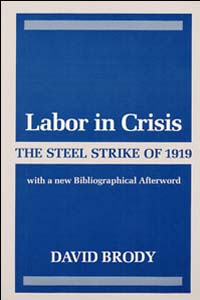 Conceived as a prologue to the 1930s industrial-union triumph in steel, Labor in Crisis explains the failure of unionization before the New Deal era and the reasons for mass-production unionism's eventual success.

Widely regarded as a failure, the great 1919 steel strike had both immediate and far-reaching consequences that are important to the history of American labor. It helped end the twelve-hour day, dramatized the issues of the rights to organize and to engage in collective bargaining, and forwarded progress toward the passage of the Wagner Act, which, in turn, helped trigger John L. Lewis's decision to launch the CIO.

David Brody, professor of history at the University of California-Davis, is the author of several books, including Workers in Industrial America: Essays on the Twentieth-Century Struggle, and the editor of The American Labor Movement.