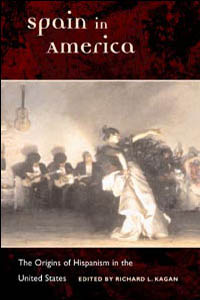 Setting aside the pastiche of bullfighters and flamenco dancers that has dominated the U.S. image of Spain for more than a century, this innovative volume uncovers the roots of Spanish studies to explain why the diversity, vitality, and complexity of Spanish history and culture have been reduced in U.S. accounts to the equivalent of a tourist brochure.

Spurred by the complex colonial relations between the United States and Spain, the new field of Spanish studies offered a way for the young country to reflect a positive image of itself as a democracy, in contrast with perceived Spanish intolerance and closure. Spain in America investigates the political and historical forces behind this duality, surveying the work of the major nineteenth-century U.S. Hispanists in the fields of history, art history, literature, and music. A distinguished panel of contributors offers fresh examinations of the role of U.S. writers, especially Washington Irving and Henry Wadsworth Longfellow, in crafting a wildly romantic vision of Spain.

They examine the views of such scholars as William H. Prescott and George Ticknor, who contrasted the "failure" of Spanish history with U.S. exceptionalism. Other essays explore how U.S. interests in Latin America consistently colored its vision of Spain and how musicology in the United States, dominated by German émigrés, relegated Spanish music to little more than a footnote. Also included are profiles of the philanthropist Archer Mitchell Huntington and the pioneering art historians Georgiana Goddard King and Arthur Kingsley Porter, who spearheaded U.S. interest in the architecture and sculpture of medieval Spain.

Providing a much-needed look at the development and history of Hispanism, Spain in America opens the way toward confronting and modifying reductive views of Spain that are frozen in another time.

"In all, this is an excellent collection of serious studies, of interest to anyone curious about the origins of Spanish studies ("Hispanism") in this country." -- Virginia Quarterly Review

"This is an important work that gives a beinning student a framework in which to understand the basis of hispanism's historiography and hte seasoned specialist a fresh look at old friends."-- Adán Benavides, Journal of the West