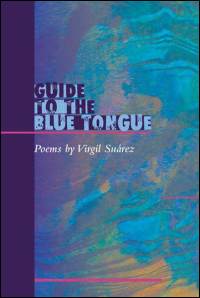 Shimmering with saturated color and heat, Guide to the Blue Tongue is an intoxicating sequence of memory poems about growing up in the tropics, threaded through the myth of Caliban from Shakespeare's The Tempest.

Caliban is the monstrous native, in love with what he cannot possess, lost to his own sense of identity. In Virgil Suárez's vision, the island of Caliban's imprisonment merges with the island of Cuba, where the carboneros make charcoal and sell it door-to-door by the pound, young boxers crackle with caged energy, dock workers spill like ants out of the bellies of ships, and the rain falls in torrents on corrugated tin roofs. On this island of fire, the Marquis de Sade joins other historical figures to drink absinthe, and J. Edgar Hoover lingers over mojitos and a cigar at the Tropicana Night Club in Old Havana. Hovering behind the hotel shutters or half-concealed behind their masks, the old poets and prophets--Shakespeare, Tiresias, Pablo Neruda--are waiting to speak their passions.

Out of this rich imaginative brew, Suárez evokes the mythical and historical landscape of Cuba and distills the "hollow, deep-thudded pangs" of exile's rootlessness, the immigrant's constant longing to be possessed by a sense of place. Steeped in a seductive, incantatory language of desire, Guide to the Blue Tongue gives entry to a place of blue possibility and daily undoing, where the sting of salt-fresh air is compounded by the ache of displacement and loss.

"Suárez 's suffering, beachcombing savage merges with the island itself to form the consciousness that flows within these richly descriptive, sometimes melancholy, sometimes surreal lyrics. . . . Suárez 's poems of place and displacement are sensual, mythic, and quietly trenchant." -- Booklist