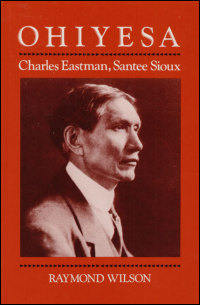 Charles Eastman, or "Ohiyesa" in Santee, came of age during a period of increasing tension and violence between Native and "new" Americans. Raised to become a hunter-warrior, he was nevertheless persuaded by his Christianized father to enter the alien world of white society. A remarkably bright student, Eastman graduated from Dartmouth College and the Boston University School of Medicine. Later on he served as government physician at the Pine Ridge Agency (and tended casualties at Wounded Knee), as Indian Inspector for the Bureau of Indian Affairs, and as Indian secretary for the YMCA, and helped found the Boy Scouts of America.

Concurrently, however, he also worked on special congressional legislation to settle Sioux claims and was a charter member and later president of the Society of American Indians. It was his writing, though, which most clearly established Eastman's determination to hold on to his roots. In works such as Indian Boyhood, The Soul of the Indian, and Indian Heroes and Chieftains he reconfirmed his native heritage and tried to make white society aware of the Indians' contribution to American civilization.