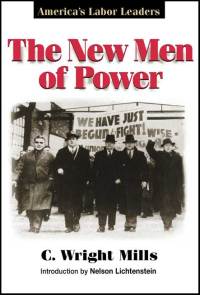 When C. Wright Mills published The New Men of Power in 1948, hethought labor leaders a new strategic elite and the unions a set of vanguard organizations that were crucial to "stopping the main drift towards war and slump." Today, as the unions once again seek to play a decisive role in American life, Mills' remarkable probe into the structure and ideology of mid-twentieth-century trade unionism remains essential reading. A new introduction by historian Nelson Lichtenstein offers insight into the Millsian political world at the time he wrote The New Men of Power.

C. Wright Mills (1916-62), the author of White Collar: The American Middle Classes, The Power Elite, and other books, taught for many years at Columbia University.

Nelson Lichtenstein, a professor of history at the University of California at Santa Barbara, is the author of Walter Reuther:The Most Dangerous Man in Detroit and other books.

"The New Men of Power is a brilliant, original, and provocative work, genuinely democratic and boldly radical in its character. . . . I have not read for a long time any book which in its main bearings casts more valuable light on the tensions of American society or which is more stimulating and fruitful in its challenges to the reader."-- Arthur Schlesinger Jr.

"C. Wright Mills has written a book in total opposition to suchcurrent inclinations as quietism, ideal-community building, advocacy of "preventive" atomic war, a truce with the right because of fear of Stalinism. . . . We owe him a considerable debt of gratitude for having tried, in a time of depressed silence, to reopen a discussion of politics."--Irving Howe, Partisan Review

"This reissue of a classic in labor sociology, with Nelson Lichtenstein's superb introduction, could hardly be more timely. C. Wright Mills's insights into the dilemmas and dynamics of union leadership are often as relevant today as they were in the late 1940s. And now, more than half a century after this powerful study first appeared, a new generation of unionists is emerging that may yet fulfill Mills's hopes--so deeply disappointed in the years after The New Men of Power first appeared--for labor-centered progressive social change."--Ruth Milkman, director of the Institute for Labor and Employment, University of California at Los Angeles