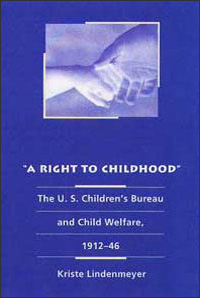 "A Right to Childhood"

Warring factions in the United States like to use children as weapons for their political agendas as Americans try to determine the role--if any--of the federal government in the lives of children. But what is the history of child welfare policy in the United States? What can we learn from the efforts to found the U.S. Children's bureau in 1903 and its eventual dismemberment in 1946?

This is the first history of the Children's Bureau and the first in-depth examination of federal child welfare policy from the perspective of that agency. Its goal was to promote "a right to childhood," and Kriste Lindenmeyer unflinchingly examines the successes--and the failures--of the Bureau. She analyzes infant and maternal mortality, the promotion of child health care, child labor reform, and the protection of children with "special needs" from the Bureau's inception through the Depression, and through all the legislation that impacted on its work for children. The meaningful accomplishments and the demise of the Children's Bureau have much to tell parents, politicians, and policy-makers everywhere.