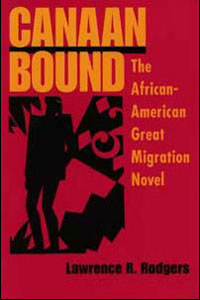 The Great Migration--the exodus of more than six million blacks from their southern homes hoping for better lives in the North--is a defining event of post-emancipation African-American life and a central feature of twentieth-century black literature. Lawrence Rodgers explores the historical and literary significance of this event and in the process identifies the Great Migration novel as a literary form that intertwines geography and identity.

Drawing on a wide range of major literary voices, including Richard Wright, Ralph Ellison, and Toni Morrison, as well as lesser-known writers such as William Attaway (Blood on the Forge) and Dorothy West (The Living Is Easy), Rodgers conducts a kind of literary archaeology of the Great Migration. He mines the writers' biographical connections to migration and teases apart the ways in which individual novels relate to one another, to the historical situation of black America, and to African-American literature as a whole.

In reading migration novels in relation to African-American literary texts such as slave narratives, folk tales, and urban fiction, Rodgers affirms the southern folk roots of African-American culture and argues for a need to stem the erosion of southern memory.

"A challenging and welcome new perspective. . . . Promises to remain a definitive work for many years to come." -- Eric Sundquist, University of California, Los Angeles