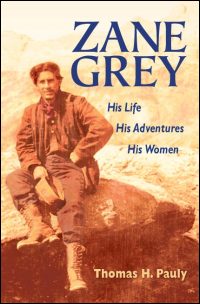 Zane Grey was a disappointed aspirant to major league baseball and an unhappy dentist when he belatedly decided to take up writing at the age of thirty. He went on to become the most successful American author of the 1920s, a significant figure in the early development of the film industry, and a central player in the early popularity of the Western.

Thomas H. Pauly's work is the first full-length biography of Grey to appear in over thirty years. Using a hitherto unknown trove of letters and journals, including never-before-seen photographs of his adventures--both natural and amorous--Zane Grey has greatly enlarged and radically altered the current understanding of the superstar author, whose fifty-seven novels and one hundred and thirty movies heavily influenced the world's perception of the Old West.

Thomas H. Pauly is a professor of English at the University of Delaware. He is the author of books on Elia Kazan and the historical background of the musical Chicago.