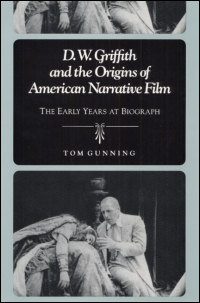 D.W. Griffith and the Origins of American Narrative Film

The legendary filmmaker D. W. Griffith directed nearly 200 films during 1908 and 1909, his first years with the Biograph Company. While those one-reel films are a testament to Griffith's inspired genius as a director, they also reflect a fundamental shift in film style from "cheap amusements" to movie storytelling complete with characters and narrative impetus.

In this comprehensive historical investigation, drawing on films preserved by the Library of Congress and the Museum of Modern Art, Tom Gunning reveals that the remarkable cinematic changes between 1900 and 1915 were a response to the radical reorganization within the film industry and the evolving role of film in American society. The Motion Picture Patents Company, the newly formed Film Trust, had major economic aspirations. The newly emerging industry's quest for a middle-class audience triggered Griffith's early experiments in film editing and imagery. His unique solutions permanently shaped American narrative film.

Tom Gunning is a member of the department of film at the State University of New York at Purchase.

"The definitive work on Griffith's early career. . . . Will solidify the way in which film scholars, critics, and teachers conceive of not only Griffith's crucial contributions to film history but all early filmmaking in the U.S."--David Desser, coauthor of American Jewish Filmmakers: Traditions and Trends

"An all-encompassing vision of D.W. Griffith's early work. Gunning's study is full of new information and places the Biographs in a lucid historical-critical context that will serve any future scholar who ventures into the realm of early cinema."--Joyce E. Jesionowski, author of Thinking in Pictures: Narrative Structure in D. W. Griffith's Biograph Films

"A must purchase for motion picture buffs and historians."--Morse Press-News