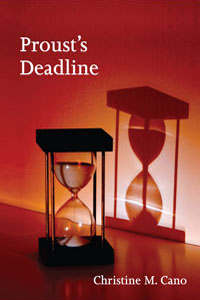 Marcel Proust’s multivolume masterpiece, À la recherche du temps perdu, began to appear in 1913. Over the next fifty years, it gained a reputation as one of the greatest literary works of the twentieth century. But the novel’s classic image as a completed work was later shattered by the discovery of unpublished drafts, and the “war of the Prousts” has kept scholars arguing over its definitive form ever since.

Christine M. Cano’s Proust’s Deadline presents a concise history of the publishing and reception of À la recherche du temps perdu, and sorts out the most important issues that have arisen from the ensuing debates about the text. She ultimately shows how this quintessential “book about time” tells another story about time’s passage: the story of Proust’s mortal confrontation with the temporality of writing, publishing, and reading.

"In this carefully researched and comprehensive book, Cano relates with admirable succinctness the story of the writing and publication of Marcel Proust's vast novel. . . . Every Proust scholar will find Proust's Deadline a useful and engaging guide to the history of the creation and current status of A la recherche du temps perdu, as well as to its proliferating editions and translations."--H-France Review

“An energetic and rewarding read, Proust’s Deadline offers both a publication history and a fresh approach as to how Proust and his scholars continue to confront the threats of contingency and time.”--Nineteenth-Century French Studies

“Cano’s elegant book tells a dramatic story in some of the most polished prose one can have the pleasure of reading, and her expertise will satisfy general readers, scholars of Proust, and everyone in between.”--Armine Kotin Mortimer, coeditor of Proust in Perspective: Visions and Revisions