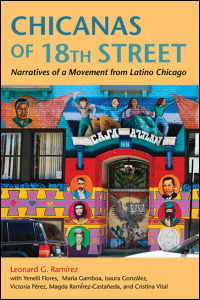 Overflowing with powerful testimonies of six female community activists who have lived and worked in the Pilsen neighborhood of Chicago, Chicanas of 18th Street reveals the convictions and approaches of those organizing for social reform. In chronicling a pivotal moment in the history of community activism in Chicago, the women discuss how education, immigration, religion, identity, and acculturation affected the Chicano movement. Chicanas of 18th Street underscores the hierarchies of race, gender, and class while stressing the interplay of individual and collective values in the development of community reform.

Highlighting the women's motivations, initiatives, and experiences in politics during the 1960s and 1970s, these rich personal accounts reveal the complexity of the Chicano movement, conflicts within the movement, and the importance of teatro and cultural expressions to the movement. Also detailed are vital interactions between members of the Chicano movement with leftist and nationalist community members and the influence of other activist groups such as African Americans and Marxists.

Leonard G. Ramírez is the past director of the Latin American Recruitment and Educational Services program at the University of Illinois at Chicago.

"The personal testimonies make for exciting reading. . . . Ramírez and his interviewees present an untold story of Chicana/o student activism in the Midwest that has all but been ignored in New Left historiography and Chicago history."--Journal of Illinois History

"Chicanas of 18th Street provides a fascinating narrative that uses rich personal accounts to detail the history of individual women and the Chicano movement in Chicago during the 1960s and 1970s."--Oral History Review

"A fascinating account of Latina activists during the height of the Chicano movement in Chicago. The personal testimonies allow readers to see the dynamics that transform community members into activists. This engaging study appeals to students and scholars of women's studies, political science, sociology, and Latina studies."--Mary S. Pardo, author of Mexican American Women Activists: Identity and Resistance in Two Los Angeles Communities

"Women's oral history enthusiasts will find this book a treasure trove of ideas and experiences that is brimming with details about the events, organizations, and cultural work of women in the Chicano movement."--Dionne Espinoza, coeditor of Enriqueta Vasquez and the Chicano Movement: Writings from El Grito del Norte