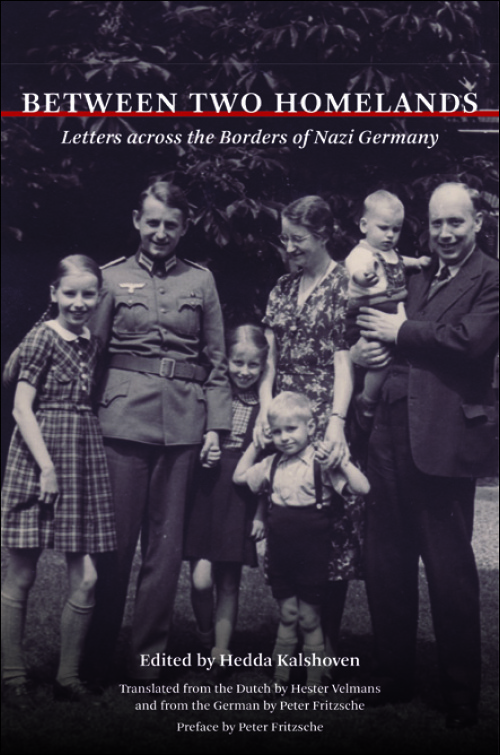 Letters across the Borders of Nazi Germany
Author: Edited by Hedda Kalshoven
Translated from the Dutch by Hester Velmans and from the German by Peter FritzschePreface by Peter Fritzsche
How a family with members in Germany and in occupied Netherlands responded to the Nazi regime, World War II, and its aftermath
Cloth – $125
978-0-252-03830-3
Paper – $27
978-0-252-07985-6
eBook – $19.95
978-0-252-09617-4
Cloth: 06/30/2014
Buy the Book Request Desk/Examination Copy Request Review Copy Request Rights or Permissions Request Alternate Format
Book Share Preview

In 1920, at the age of thirteen, Irmgard Gebensleben first traveled from Germany to the Netherlands on a "war-children transport." She would later marry a Dutch man and live and raise her family there while keeping close to her German family and friends through the frequent exchange of letters. Yet during this period geography was not all that separated them. Increasing divergence in political opinions and eventual war between their countries meant their correspondence contained not only family news but personal perspectives on the individual, local, and national choices that would result in the most destructive war in history.

This important collection, first assembled by Irmgard Gebensleben’s daughter Hedda Kalshoven, gives voice to ordinary Germans in the Weimar Republic and the Third Reich and in the occupied Netherlands. The correspondence between Irmgard, her friends, and four generations of her family delve into their most intimate and candid thoughts and feelings about the rise of National Socialism. The responses to the German invasion and occupation of the Netherlands expose the deeply divided loyalties of the family and reveal their attempts to bridge them. Of particular value to historians, the letters evoke the beliefs of the family members and their understanding of the dramatic events happening around them.

This first English translation of Ik denk zoveel aan jullie: Een briefwisseling tussen Nederland en Duitsland 1920-1949 has been edited, abridged, and annotated by Peter Fritzsche with the assent and collaboration of Hedda Kalshoven. After the book's original publication the diary of Irmgard's brother and loyal Wehrmacht soldier, Eberhard, was discovered and edited by Kalshoven. Fritzsche has drawn on this additional source in annotating the translation.

* The publisher gratefully acknowledges the support of the Dutch Foundation for Literature AND on recto of separate page in the front matter, observing line breaks and lowercase letters: publication of this volume is made possible by Jewish Federation of Greater Hartford within one homeland

Hedda Kalshoven is the daughter of Irmgard Gebensleben. Peter Fritzsche is W.D. and Sara E. Trowbridge Professor of History at University of Illinois at Urbana-Champaign and author of Life and Death in the Third Reich and many other books.

“Revealing and deeply disturbing. . . . This is useful but sad and frustrating commentary on ordinary people living their lives while the world around them is on fire.”--Booklist

"Seen from beginning to end, these collected letters and diary entries help explain why Hitler and the National Socialists found broad support in Germany. . . . Perhaps above all else, this collection of letters reveals how this tragic global conflict reverberated in the most intimate spaces and relationships."--HISTORY

"A captivating book and an important contribution to the vast body of literature on Third Reich Alltagsgeschichte (history of every day life). This rate collection of letters provides an honest depiction of the everyday lives of Germans living through economic travail, political violence, dictatorship, and war."--H-German

"Between Two Homelands offers a distinctive perspective on the history of Nazi-era Europe. The letter collection, and the more newly discovered diary, allow the reader to watch events unfold as they are happening and through the eyes of people who are living in the moment and don't know how the story turns out. The letters allow readers to see, for example, how people weighed career ambitions against ethical scruples in deciding to participate in Nazi projects while trying to convince themselves and others that they are 'good' or 'civilized' people. There is really nothing else quite like this book."--Mary Jo Maynes, coauthor of The Family: A World History