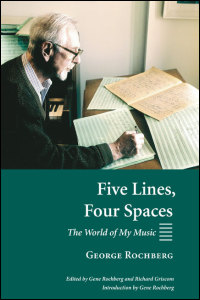 The World of My Music

The candid, insightful memoir of a maverick American composer and publisher

Finished just weeks before his death, George Rochberg's eloquent memoir offers a detailed look at his fruitful life as a composer, publisher, and teacher of music. The volume traces a life immersed in music, with early study under George Szell and Gian Carlo Menotti and later long-term collaborations with the Concord Quartet and commissions for major orchestras and opera companies. Rochberg takes care to describe the intellectual and aesthetic changes that led him down certain paths as a composer, often challenging the conventions of the day. Reflecting on music, aesthetics, colleagues, and the life of the creative mind, Rochberg's memoir captures not only the spirit but also the intellectual climate of the second half of the twentieth century.

Rochberg's life as a composer was marked by an ongoing search for his artistic place between tradition and the avant-garde, with an extensive oeuvre comprising over one hundred works including chamber ensembles, string quartets, symphonies, solo pieces, songs, and an opera. In addition to his importance as an American composer, he was also a central figure in academia and publishing. He served as chair of the University of Pennsylvania's music department, and as an editor and director of publications at the Theodore Presser Company, he helped marshal the company into one of the premier American musical publishing houses.

Through the course of the book, Rochberg reveals the thought processes that led him in unexpected directions as he pursued the independent path of his career. This is the story of a creative mind developing, at times struggling, and constantly growing.

Publication for this book was supported in part by a grant from the National Endowment for the Arts.

"One of the most significant composers of the twentieth century, George Rochberg was not only an important musical voice but also a critic and philosopher whose personal ideas and convictions shook the musical world to its core. This book brings us into the mind of a great composer, and that alone is worth the entire book in its verity and truth."--George Boziwick, composer and chief of the music division, The New York Public Library for the Performing Arts

"There was not a better chronicler of music in the twentieth century than George Rochberg. His writings on music are among the most illuminating and insightful we have. His observations, like his best music, are alive with immediacy and conviction."--Michael Hersch, composer and composition faculty, The Peabody Institute of the Johns Hopkins University

"I first met George Rochberg while I was a young professor; his presence and point of view were a revelation to me. He was an excellent writer, with a breadth of reading and reference rarely found in composers I've known. But it is as a composer that his work has most moved me."--William Bolcom, composer and Ross Lee Finney Distinguished University Professor Emeritus of Composition, University of Michigan

"George Rochberg was a visionary composer who changed the face of American music. He was a generous and inspiring teacher, and a thoughtful and provocative writer. For anyone interested in contemporary art and music, this book is essential reading."--Uri Caine, jazz pianist and composer

George Rochberg (1918-2005) composed six symphonies, three concertos, seven string quartets, and dozens of chamber and solo works over the course of a career spanning six decades. After establishing himself as a modernist composer, he grew dissatisfied with the expressive limitations of serial composition. Through explorations in his music and his writings, he arrived at a more inclusive compositional style that embraced both the old and the new, yielding groundbreaking works such as Music for the Magic Theater, the String Quartet no. 3, and the Concord Quartets. The revised edition of his collected writings on music, The Aesthetics of Survival, was the recipient of an ASCAP Deems Taylor Award in 2006.

Gene Rochberg met George in 1938 while both were students at what is now Montclair State University. They married in 1941. After they moved to Philadelphia, Gene studied at the Hedgerow Theatre School and the Barnes Foundation and was actively involved in theater and the other arts. She collaborated with her husband on a number of works, including the monodrama Phaedre and the opera The Confidence Man.

Richard Griscom is the head of the Otto E. Albrecht Music Library at the University of Pennsylvania. He is the coauthor of The Recorder: A Research and Information Guide and former editor of the quarterly journal of the Music Library Association, Notes.