A new American future written in dots and dashes

The completion of the Transcontinental Telegraph in 1861 completed telegraphy's mile-by-mile trek across the West. In addition to linking the coasts, the telegraph represented an extraordinary American effort in many fields of endeavor to know, act upon, and control a continent.

Merging new research with bold interpretation, James Schwoch details the unexplored dimensions of the frontier telegraph and its impact. The westward spread of telegraphy entailed encounters with environments that challenged Americans to acquire knowledge of natural history, climate, and a host of other fields. Telegraph codes and ciphers, meanwhile, became important political, military, and economic secrets. Schwoch shows how the government's use of commercial networks drove a relationship between the two sectors that served increasingly expansionist aims. He also reveals the telegraph's role in securing high ground and encouraging surveillance. Both became vital aspects of the American effort to contain, and conquer, the West's indigenous peoples—and part of a historical arc of concerns about privacy, data gathering, and surveillance that remains pertinent today.

Entertaining and enlightening, Wired into Nature explores an unknown history of the West.

"This text is a useful treatment of the subject, and will be a welcome addition to collections in the history of technology and western American history." --Choice

"Wired into Nature is a carefully documented and compelling read." --The Annals of Iowa

"This book is not to be missed by serious students of information technology." --The Journal of American History

"Wired into Nature opens up a new field of inquiry by examining the frontier expansion of the telegraph into the western U.S., with commendable attention both to how environmental factors shaped the story and to how the telegraph functioned as an instrument of state power and political control, especially through the military." --Technology and Culture

"Wired into Nature, which includes many helpful illustrations, is based on enormous archival research but is not bogged down by unnecessary details. It is instead written in quite readable, often eloquent, prose. Wired into Nature deserves a wide readership." --Pacific Historical Review

"Drawing on both detailed historical scholarship and a refreshing geographical sensibility, Wired into Nature provides a unique and important perspective on the vast strategic, ecological, and cultural impact of North America's first electrical information network. James Schwoch brings important questions of environment, indigeneity, and surveillance back into the story of the telegraph, in a sweeping narrative that connects the mapping and exploitation of the American West to the development of the White House Situation Room. Schwoch reminds us that the story of communication infrastructure in American history involves not just the intensive development of urban technologies, consumers, and firms, but also the extensive reconfiguration of contested landscapes, involving both military and cultural struggles with nature, climate, and, most crucially, Native American peoples. This innovative work crosses the boundaries between military, political, technological, and environmental history, and is a must-read for students of our contemporary information society."--Gregory J. Downey, author of Telegraph Messenger Boys: Labor, Technology, and Geography, 1850-1950

"Wired into Nature is a rich and original exploration of the telegraph in the American West, grounded in meticulous archival research. It tells us a powerful story about the relationship between wires and nature, and unravels the hidden and formative connections between our communications systems and the environment, climate, and surveillance. James Schwoch brilliantly tracks the making and unmaking of the telegraph, from the draft animals that pulled its poles to the weaponized fires it ignited; from its disruption by Native Americans to the early development of network security; and from the weather reports it collected to its command in Washington. This book will transform our understanding of electronic communications networks, both past and present. If there is one history to read in the current moment, Wired into Nature is it."--Nicole Starosielski, coeditor of Signal Traffic: Critical Studies of Media Infrastructures

James Schwoch is a professor of communication studies at Northwestern University. He is the author of The American Radio Industry and Its Latin American Activities, 1900-1939 and Global TV: New Media and the Cold War, 1946–69. 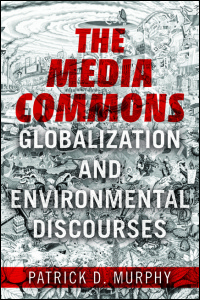