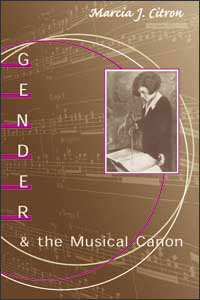 Gender and the Musical Canon

Well written and consistently provocative, Gender and the Musical Canon is a comprehensive and balanced study of women composers and their music. A classic in gender studies in music, it is nonetheless accessible for musically educated lay reader.

A classic in gender studies in music, Marcia J. Citron's comprehensive, balanced work lays a broad foundation for the study of women composers and their music. Drawing on a diverse body of feminist and interdisciplinary theory, Citron shows how the western art canon is not intellectually pure but the result of a complex mixture of attitudes, practices, and interests that often go unacknowledged and unchallenged.

Winner of the Pauline Alderman Prize from the International Alliance of Women in Music, Gender and the Musical Canon explores important elements of canon formation, such as notions of creativity, professionalism, and reception. Citron surveys the institutions of power, from performing organizations and the academy to critics and the publishing and recording industries, that affect what goes into the canon and what is kept out. She also documents the nurturing role played by women, including mothers, in cultivating female composers. In a new introduction, she assesses the book's reception by composers and critics, especially the reactions to her controversial reading of Cécile Chaminade's sonata for piano.

A key volume in establishing how the concepts and assumptions that form the western art music canon affect female composers and their music, Gender and the Musical Canon also reveals how these dynamics underpin many of the major issues that affect musicology as a discipline.

"I never thought in my wildest dreams that I would be so interested in a scholarly book of this type. As a woman composer and a teacher of music, I felt so connected to the ideas in it and, more importantly, utterly empowered by them. I have recommended it to everyone I know!" -- Joan Tower "Important and timely. . . . Valuable to anyone from the high school student to the most accomplished academic." -- Renée Cox Lorraine, MLA Notes

"[Citron] succeeds admirably in laying out the fundamental problems and the solutions thus far available. . . . [Her] book is well written and continuously provocative." -- Lydia Goehr, Music and Letters