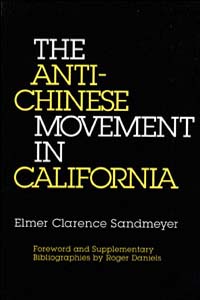 The Anti-Chinese Movement in California

Originally published in 1939, this book was the first objective study of the anti-Chinese movement in the Far West, a subject that is as much a part of the history of California as the mission period or the gold rush. Some historians of the Asian American experience consider it to be, more than half a century later, the most satisfactory work on the subject.