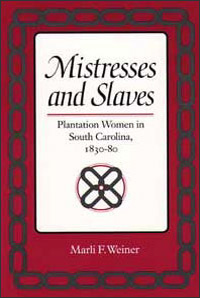 Women's shared experiences across the divide of slavery

Marli Weiner challenges much of the received wisdom on the domestic realm of the nineteenth-century southern plantation—a world in which white mistresses and female slaves labored together to provide food, clothing, and medicines to the larger plantation community. Black and white women, though divided by race, shared common female experiences and expectations of behavior. Influenced by work and gender as much as race, the mistresses and female slaves interacted with one another very differently than they did with men. Weiner draws on the women's own words to offer fresh interpretations of the ideology of domesticity that influenced women's race relations before the Civil War, the gradual changes in attitudes during the war, and the harsh behaviors that surfaced during Reconstruction.

"An original and provocative presentation of plantation women in the mid-nineteenth century. . . . Weiner provides one of the most detailed analyses of the South's ideology of domesticity, and she helps us to understand female agency in the shifting nature of Southern race relations."--Journal of Social History

Marli F. Weiner (d. 2009) was Adelaide & Alan Bird Professor of History at the University of Maine. Her books include Sex, Sickness, and Slavery: Illness in the Antebellum South.