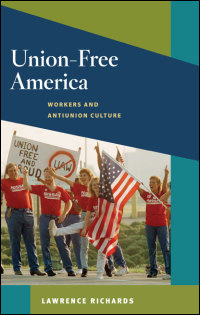 How antiunionism shapes the hearts and minds of American workers

This book confronts one of the most vexing questions for labor activists and labor academics: why is there so much opposition to organized labor in the United States? Lawrence Richards provides a provocative explanation for this hostility: a pervasive strain of antiunionism in American culture that has made many workers distrustful of organized labor.

Assessing organizing efforts among blue-collar, white-collar, and pink-collar workers, Richards examines the tactics and countertactics of company and union representatives who sought to either exploit or neutralize workers' popular negative stereotypes of organized labor's insidious control over workers' autonomy. The book considers a number of case studies of organizing drives throughout recent history, from the failed attempt by District 65 to organize clerical workers at New York University in 1970 to a similarly fruitless drive by the Textile Workers Union in 1980 at a textile factory in Charlottesville, Virginia. By examining the manifestations and motivations of antiunion culture in the United States, Richards helps explain why so many American workers seem to vote against their own self-interest and declare themselves "Union Free and Proud."

"This work should help reorient the scholarship in a field that has been adrift. Recommended."--Choice

“This is obviously an important and thought-provoking book. . . . I recommend it highly.”--Labor Studies Journal

"[Richards's] thorough and detailed exploration of how employers at Ix and NYU manipulated National Labor Relations Board rules reveals some very impressive research."--Journal of American History

"[Richards] deepens our understanding of the failure of unions in the postwar period."--American Historical Review

"Effectively capture[s] the pervasiveness and the toxicity of the antiunion image in American popular culture."--Journal of Southern History

"A thoroughly researched and a well organized and very readable account of the problems that have historically confronted unions in America."--Labour History

"A compelling and provocative framework to reassess the long-term decline of popular support for unions in American society."--Labour/Le Travail

"A stimulating book packed full of rich details and colorful evidence. In examining groups that have been neglected by historians--particularly clerical employees, teachers, and other white-collar workers--Richards provides vivid insight into antiunion attitudes and overcomes historians' tendency to focus on union supporters."--Timothy Minchin, author of Fighting Against the Odds: A History of Southern Labor since World War II

"An outstanding contribution to our understanding of the lives of working people, past and present. Lawrence Richards's careful examination of workers' resistance to union appeals breaks new ground, while his case studies of failed organizing campaigns illuminate workers' ambivalent and often hostile views of organized labor. This account of men and women who are usually neglected by celebrants of unionism enriches the historical narrative and reminds us of the cultural and ideological obstacles that labor activists have faced and continue to confront."--Robert H. Zieger, Distinguished Professor of History, University of Florida

Lawrence Richards is a visiting assistant professor of history at Miami University of Ohio.