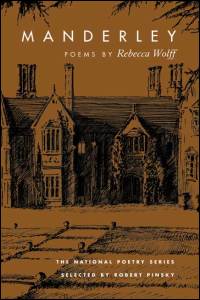 In the Manderley of Rebecca, Daphne du Maurier's forbidding haven of mocking ghosts and secrets that refuse to remain buried, nothing is as it seems. So in this stunning debut collection by Rebecca Wolff, cities, partners, mothers, sisters, friends, and perfect strangers all disguise their true faces, while they who seek connection are "transported from one great gaping / hole in the fabric / of our knowledge to another."

No passage is too dark, no garden too tangled for the troubled dreamer of Manderley. Wolff turns a quicksilver gaze on a fluid world where both the real and the imaginary are transfigured. Tempering steely candor with a sophisticated delight in wordplay, these poems turn on a dime from the sensual to the eerie, the resigned to the hopeful, the comforting to the shocking. Each poem weaves together layers of dream, remembrance, and fantasy, distilling from romantic excess a gritty, spare language of truth-telling and surprise.

"Manderley tears mosses off the old manse of Du Maurier's haunted classic Rebecca, tosses them with a heady late 90s bravura ('Not intonation/ but affect'), and ends up, along with metaphorical 'Day Laborers' of one poem, '[p]lanting like a god/ in the afterglow of the newly minted.' . . . Wolff here sets the house afire." -- Publishers Weekly

"The virtue of these poems is their speed: a restless, fourth-cup-of-coffee pacing, jumping from persona to persona and voice to voice. . . . And anyone who doubts Wolff's capacity to be simply and screamingly funny must turn immediately to 'The Proverbial Handshake: The Sharon Olds Poem,' which should embarrass all young poets who dream of writing shameless parodies of their elders, but lack the gumption." -- Craig Arnold, Poetry

"Manderley demonstrates in new ways poetry's old power to exhilarate while it cuts to the quick. . . . . Intelligent, purposeful as well as comic, wonderfully attentive to sound, Wolff uses her gift for gorgeous, poetic gab to conjure presences from the boundaries of language. This is a distinguished and distinctive first book." -- Robert Pinsky

Rebecca Wolff's second collection, Figment, won the Barnard Women Poets Prize and was published by W. W. Norton in 2004. Her third book of poems, The King, will appear in 2009 from Norton. Wolff is the editor of Fence and Fence Books, and lives in Athens, New York, with her family. She is a fellow of the New York State Writers Institute.