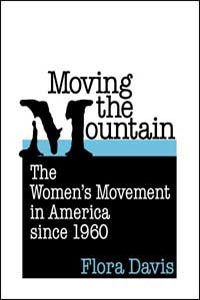 The Women's Movement in America since 1960

Moving the Mountain tells the story of the struggles and triumphs of thousands of activists who achieved "half a revolution" between 1960 and 1990. In this award-winning book, the most complete history of the women's movement to date, Flora Davis presents a grass-roots view of the small steps and giant leaps that have changed laws and institutions as well as the prejudices and unspoken rules governing a woman's place in American society. Looking at every major feminist issue from the point of view of the participants in the struggle, Moving the Mountain conveys the excitement, the frustration, and the creative chaos of feminism's Second Wave. A new afterword assesses the movement's progress in the 1990s and prospects for the new century.

"[T]his balanced, gripping, inspirational chronicle of the contemporary women's movement in the U.S. should be a standard resource for years to come."--Publisher's Weekly

"An unbiased, finely detailed account of the second wave of the women's movement in America. Rarely is history so emotionally compelling as in Davis's depiction of the struggles and anger of these activist women."--Library Journal

"[L]ong on stories of political action and full of nitty-gritty tales about how feminists did battle with sexism."--Washington Post

"The most solid and complete history of the women's movement to date."-Susan Brownmiller, author of Against Our Will

Flora Davis has taught writing and journalism at the New School for Social Research and at Fordham University in New York City. She writes frequently about women's issues for national magazines.