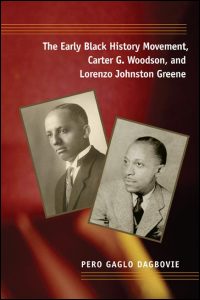 The men who launched and shaped Black Studies

Pero Gaglo Dagbovie examines the lives, works, and contributions of two of the most important figures of the early black history movement, Carter G. Woodson and Lorenzo Johnston Greene. Drawing on the two men's personal papers as well as the materials of the Association for the Study of Negro Life and History (ASNLH), Dagbovie probes the struggles, sacrifices, and achievements of the black history pioneers and offers the first major examination of Greene's life. Equally important, it also addresses a variety of overlooked issues pertaining to Woodson, including the historian's image in popular and scholarly writings and memory, the democratic approach of the ASNLH, and the pivotal role women played in the association.

"Dagbovie . . . draws on the personal papers of these two seminal historians, along with materials from the Association for the Study of Negro Life and History (ASNLH), to chronicle the growth of the modern black history movement. . . . Recommended for all black history and historiography collections."--Multicultural Review

“In addition to a careful assessment of the personalities and motivations of Woodson and Greene, Dagbovie’s work provides a solid foundation and model for future work on black historians.”--Journal of Southern History

"Dagbovie's dual biography of two giants of the black history movement is an important work. . . . The Early Black History Movement gives deeper insight on iconic figures of the early black history movement while simultaneously serving as a rebuke to disinterested black scholars in the present."--Afro-Americans in New York Life and History

"A welcome reminder of a period when scholars strove to advance knowledge and social justice. . . . Pero Dagbovie has recovered a vital chapter in that intellectual struggle, offering insight into the African American past and a reminder of roads not taken today."--A.M.E. Church Review

"Well-written and original, this dual biography of Carter G. Woodson and one of his leading disciples in the Black History Movement, Lorenzo Greene, allows historian Pero Dagbovie to explore new paths and places touched by Woodson's expansive vision of the importance of history to the overall social, economic, political, and psychological well-being and advancement of people of African descent. This is a major contribution to an overlooked and under-theorized area of African American intellectual history."--V. P. Franklin, editor of The Journal of African American History

"This book brilliantly illuminates the early black history movement through the lives and scholarship of two of its pioneers. Dagbovie expertly helps us to understand and to appreciate the nature of that 'movement' for truth and social justice."--Robert L. Harris Jr., coeditor of The Columbia Guide to African American History since 1939