A poetic rendering of life in New York City

Inspired and informed by the music and urban landscape of New York City, Tongue & Groove employs jazzy and descriptive language in a sweep of city-life experiences and memories. A passionate rendering of incidents in spaces that include the subway, a school for the handicapped, and the Museum of Modern Art, Stephen Cramer employs richly sensual language and a wide range of imagery. Alluring portrayals of butterfly migrations, graffiti, and city buses complement this collection's connection to the everyday hoots, shouts, and yammer of the streets.

"I can think of almost no other young poet who can claim Stephen Cramer's lyric authority and self-possession. His odes and elegies capture the grit and delights of New York City in a manner that manages to capture something of Crane's sense of the marvelous with Oppen's descriptive acuity. This is to say he follows in the footsteps of the giants--and he shows himself abundantly capable of filling their shoes. Tongue & Groove is a ravishing book."--David Wojahn

"Stephen Cramer's Tongue & Groove seeks unity through clarity. Each poem here forms a world of its own, but the poet . . . gives us a map of sound, where the pastoral and the urban inform each other, and the only level and plumb line that matter is the heart."--Yusef Komunyakaa

"What I love about these poems is the parabolic nature of so many of them: the very concrete physicality of the language that turns quickly in some new direction, or makes a connection with a shift of pronoun or verb tense that opens the poem out, gives it space."--Jean Gallagher

"All of the poems in this collection are aesthetically carved. Each an organically conceived arrangement with its own unique shape . . . a clustering of lines in stanzas, lively but restrained swirls of symmetries."--Scott Hightower

Stephen Cramer is the author of Shiva's Drum, a National Poetry Series winner. He lives in New York City. He teaches in the creative writing program at Johnson State College in Johnson, Vermont. 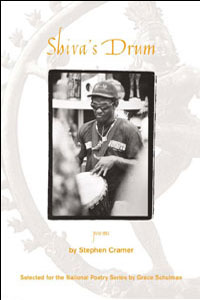