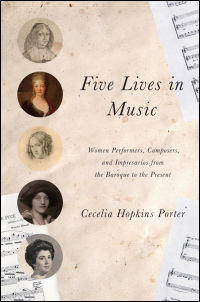 Women Performers, Composers, and Impresarios from the Baroque to the Present

Representing a historical cross-section of performance and training in Western music since the seventeenth century, Five Lives in Music brings to light the private and performance lives of five remarkable women musicians and composers. Elegantly guiding readers through the Thirty Years War in central Europe, elite courts in Germany, urban salons in Paris, Nazi control of Germany and Austria, and American musical life today, as well as personal experiences of marriage, motherhood, and widowhood, Cecelia Hopkins Porter provides valuable insights into the culture in which each woman was active.

Porter begins with the Duchess Sophie-Elisabeth of Braunschweig-Lueneberg, a harpsichordist who also presided over seventeenth-century North German court music as an impresario. At the forefront of French Baroque composition, composer Elisabeth-Claude Jacquet de La Guerre bridged a widening cultural gap between the Versailles nobility and the urban bourgeoisie of Paris. A century later, Josephine Lang, a prodigiously talented pianist and dedicated composer, participated at various times in the German Romantic world of lieder through her important arts salon. Lastly, the book profiles two exceptional women of the twentieth century: Baroness Maria Bach, a composer and pianist of twentieth-century Vienna's upper bourgeoisie and its brilliant musical milieu in the era of Gustav Mahler, Richard Strauss, Arnold Schoenberg, and Erich Korngold; and Ann Schein, a brilliant and dauntless American piano prodigy whose career, ongoing today though only partially recognized, led her to study with the legendary virtuosos Arthur Rubinstein and Myra Hess.

Mining autograph manuscripts, unpublished letters, press reviews, interviews, and music archives in the United States and Europe, Porter probes each musician's social and economic status, her education and musical training, the cultural expectations, traditions, and restrictions of each woman's society, and other factors. Throughout the lively and focused portraits of these five women, Porter finds common threads, both personal and contextual, that extend to a larger discussion of the lives and careers of female composers and performers throughout centuries of music history.

"An engaging book that draws readers into deep consideration of the complexities facing women—then and now—who forge careers in music. Highly recommended."--Choice

"A welcome contribution to the literature on women in music. Richly contextualized and engagingly written, Porter's book offers portraits of five women who have lived lives full of music and whose music should enliven our concert halls more." --Anne MacNeil, author of Music and Women of the Commedia dell'Arte in the Late Sixteenth Century

Cecelia Hopkins Porter is a classical music critic for The Washington Post and the author of The Rhine as Musical Metaphor: Cultural Identity in German Romantic Music.