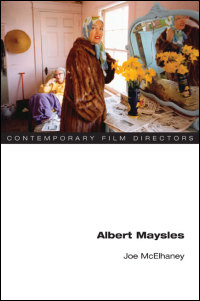 Albert Maysles has created some of the most influential documentaries of the postwar period. Such films as Salesman, Gimme Shelter, and Grey Gardens continue to generate intense debate about the ethics and aesthetics of the documentary form. A pioneer in the development of the "nonfiction feature," as well as a central figure in the history of direct cinema, his innovations have inspired Jean-Luc Godard to call Maysles "the best American cameraman." His films about Bulgarian artist Christo's large-scale art installations, including the Academy Award-nominated Christo's Valley Curtain, have often been described as among the greatest documentaries ever made about the process of creating art. In this in-depth study, Joe McElhaney offers a novel understanding of the historical relevance of Maysles. By closely focusing on Maysles's expressive use of his camera, particularly in relation to the filming of the human figure, this book situates Maysles's films within not only documentary film history but film history in general, arguing for their broad-ranging importance to both narrative film and documentary cinema. Complete with an engaging interview with Maysles and a detailed comparison of the variant releases of his documentary on the Beatles (What's Happening: The Beatles in the U.S.A. and The Beatles: The First U.S. Visit), this work is a pivotal study of a significant filmmaker.

"McElhaney's biography runs like a classic Maysles brother film, sticking to the facts, letting personal back story slip in here and there, and presenting an end-of-the-book Q&A as a sort of DVD commentary track."--Los Angeles Times

“Joe McElhaney makes a persuasive case that [Albert Maysles] belongs among the likes of Joel and Ethan Coen, Roman Polanski and Neil Jordan.”--PopMatters

"A detailed and insightful study of the work of the pioneering documentary filmmaker Albert Maysles."--Screening The Past

"In many ways, McElhaney's stance toward his subject echoes Maysles's toward his subject: sympathetic, inspired by love, unrelenting in its interrogation and analysis. This smart and articulate book is a pleasure to read."--Charles Musser, Yale University

Joe McElhaney is an associate professor in the department of film and media studies at Hunter College of the City University of New York. His books include The Death of Classical Cinema: Hitchcock, Lang, Minnelli and Vincente Minnelli: The Art of Entertainment.