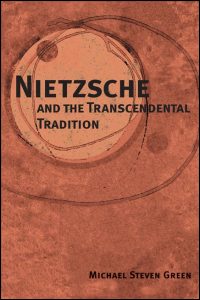 Nietzsche and the Transcendental Tradition

In recent years, both analytic thinkers and postmodern theorists have looked at Friedrich Nietzsche's epistemology from the perspectives of their philosophical traditions. Michael Steven Green's penetrating study tries instead to do justice to Nietzsche's views on truth and knowledge by looking at them from the perspective of his contemporaries, particularly the Neo-Kantian philosopher Afrikan Spir, whose ideas exerted a tremendous influence on Nietzsche's thought. Despite his generally naturalist outlook, Nietzsche was committed to an antinaturalist theory of cognition inherited from Kant and Spir. Green shows how this fundamental tension in Nietzsche's thought led him to present not only the antirealism that has commonly been attributed to him in the past, but two other epistemological positions. These are a denial of the possibility of human thought entirely, and an error theory–-the argument that all of our judgments are false–-that has strong parallels in Spir's thought and Kant's antinomies.

Viewing Nietzsche's error theory in light of Kantian transcendental idealism, Green makes sense of arguments that have previously confounded Nietzsche interpreters. Green also provides the first English translations of many passages from Spir's writings and Nietzsche's notebooks. In examining Nietzsche's thought through the lens of the philosophical influences upon him–-the philosophers that Nietzsche himself read–-Green establishes a significant new foundation from which to assess Nietzsche's place in modern philosophy and culture.