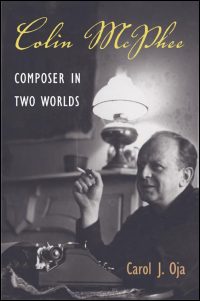 Unlocking the composer's life, struggles, and devotion to the music of Bali

Colin McPhee was a performer, writer, and pioneer among Western composers in turning to Asia for inspiration. A close friend of artists like Aaron Copland and Carlos Chavez, he played a vital role in new music activities in New York in the 1920s. But his most important accomplishments emerged from his devotion to the music of Bali.

After hearing rare recordings of the Balinese gamelan--a percussion orchestra with delicately layered textures and clangorous sounds--McPhee traveled to Bali to learn more. There, he worked closely with Western anthropologists Margaret Mead and Gregory Bateson. McPhee became a devoted and meticulous chronicler of Balinese musical culture in classic texts like Music of Bali while integrating Balinese and Western music into an imaginative hybrid that anticipated work by John Cage, Lou Harrison, and Steve Reich.

A fascinating portrait of an unconventional artist-scholar, Colin McPhee evocatively looks at key issues in composition and ethnomusicology while describing the profound experience of a composer striving to comprehend a new musical language.

"A strong and necessary argument for the reconsideration of McPhee's work as a composer."--Larry Polansky, Ethnomusicology

"Carol Oja has recounted his story with outstanding thoroughness and sensitivity. . . . McPhee's legacy is a small body of specialized work, creative and scholarly, that suggested new paths in the music of this century. It deserved--indeed, awaited--the full and well-balanced study Oja has given it."--John Beckwith, American Music

Carol J. Oja is the William Powell Mason Professor of Music at Harvard University. Her books include Bernstein Meets Broadway: Collaborative Art in a Time of War and Making Music Modern: New York in the 1920s.