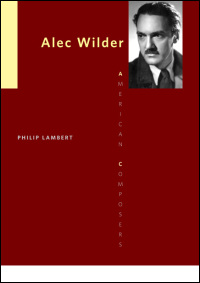 An all-embracing composer of popular and classical music

In this biography and critical investigation of Wilder's music, Philip Lambert chronicles Wilder's early work as a part-time student at the Eastman School of Music, his ascent through the ranks of the commercial recording industry in New York City in the 1930s and 1940s, his turn toward concert music from the 1950s onward, and his devotion late in his life to the study of American popular songs of the first half of the twentieth century. The book discusses some of his best-known music, such as the revolutionary octets and songs such as "I'll Be Around," "While We're Young," and "Blackberry Winter," and explains the unique blend of cultivated and vernacular traditions in his singular musical language.

"This thoughtful and innovative study is a welcome addition to the body of material on this composer. Recommended."--Choice

"Saturated with rich, detailed research, this book stands as a clear and concise introduction to Alec Wilder's life and work that is carefully geared to appeal to both musicians and nonmusicians."--Jeffrey Magee, author of Irving Berlin's American Musical Theater

Philip Lambert is a professor of music at Baruch College and the Graduate Center of CUNY. His other books include To Broadway, To Life! The Musical Theater of Bock and Harnick.

Bach and the Counterpoint of Religion

Edited by Robin A. Leaver