The fascinating financial history of selling the Olympics

Once a showcase for amateur athletics, the Olympic Games have become a global entertainment colossus powered by corporate sponsorship and professional participation. Stephen R. Wenn and Robert K. Barney offer the inside story of this transformation by examining the far-sighted leadership and decision-making acumen of four International Olympic Committee (IOC) presidents: Avery Brundage, Lord Killanin, Juan Antonio Samaranch, and Jacques Rogge. Blending biography with historical storytelling, the authors explore the evolution of Olympic commercialism from Brundage's uneasy acceptance of television rights fees through the revenue generation strategies that followed the Salt Lake City bid scandal to the present day. Throughout, Wenn and Barney draw on their decades of studying Olympic history to dissect the personalities, conflicts, and controversies behind the Games' embrace of the business of spectacle.

Entertaining and expert, The Gold in the Rings maps the Olympics' course from paragon of purity to billion-dollar profits.

"Wenn and Barney convincingly portray the progression and development within the IOC and they manage to do so without the nostalgic perspective of how the Olympic Games used to and ought to be." --idrottsforum.org

"Wenn and Barney have produced another foundational text in Olympic history, this one exploring the deepening ties between the International Olympic Committee (IOC) and the generation of commercial revenue. Utilizing exclusive access to previously undisclosed IOC documents, along with interviews with many high-ranking Olympic officials, the authors not only shed new light on IOC presidents such as Brundage, Killanin, Samaranch and Rogge, but also a diverse and colorful supporting cast whose importance is only now revealed. This book instantly becomes essential reading for anyone interested in the modern Olympic movement."--Kevin Witherspoon, author of Before the Eyes of the World: Mexico and the 1968 Olympic Games

"The Gold in the Rings traces the fascinating rise of the modern Olympic Games into today's commercial empire. Wenn and Barney remain two of our foremost historians of international sport."--Thomas M. Hunt, author of Drug Games: The International Olympic Committee and the Politics of Doping, 1960–2008

Stephen R. Wenn is a professor in the Department of Kinesiology and Physical Education at Wilfrid Laurier University. Robert K. Barney is a professor emeritus and founding director emeritus of the International Center for Olympic Studies at the School of Kinesiology at Western University. They are the authors (with Scott Martyn) of Tarnished Rings: The International Olympic Committee and the Salt Lake City Bid Scandal. 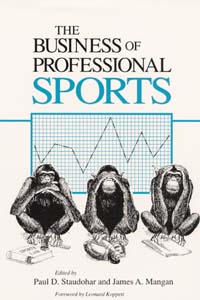 The Business of Professional Sports

Edited by Paul D. Staudohar and James A. Mangan