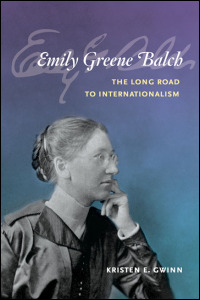 The Long Road to Internationalism

A colorful biography of a leading female advocate for international peace

A well-known American academic and cofounder of Boston's first settlement house, Emily Greene Balch was an important Progressive Era reformer and advocate for world peace. Balch served as a professor of economics and sociology at Wellesley College for twenty years until her opposition to World War I resulted with the board of trustees refusing to renew her contract. Afterwards, Balch continued to emphasize the importance of international institutions for preventing and reconciling conflicts. She was awarded a Nobel Peace Prize in 1946 for her efforts in cofounding and leading the Women's International League for Peace and Freedom (WILPF).

In tracing Balch's work at Wellesley, for the WILPF, and for other peace movements, Kristen E. Gwinn draws on a rich collection of primary sources such as letters, lectures, a draft of Balch's autobiography, and proceedings of the WILPF and other organizations in which Balch held leadership roles. Gwinn illuminates Balch's ideas on negotiated peace, internationalism, global citizenship, and diversity while providing pointed insight into her multifaceted career, philosophy, and temperament. Detailing Balch's academic research on Slavic immigration and her arguments for greater cultural and monetary cohesion in Europe, Gwinn shows how Balch's scholarship and teaching reflected her philosophical development.

This first scholarly biography of Balch helps contextualize her activism while taking into consideration changes in American attitudes toward war and female intellectuals in the early twentieth century.

"This gracefully written, intelligent biography is a wonderful addition to the expanding literature that probes the history of the United States in the context of world history. Kristen E. Gwinn's skillful writing and thorough research will be appreciated by scholars and enjoyed by the many readers it deserves."--Martin J. Sherwin, coauthor (with Kai Bird) of the Pulitzer Prize-winning American Prometheus: The Triumph and Tragedy of J. Robert Oppenheimer

"With Kristen E. Gwinn's informative and very enjoyable biography, Emily Greene Balch will no longer live in Jane Addams’s shadow. As a Nobel Peace Prize laureate for her work with the Women's International League for Peace and Freedom, Balch is an important figure in our nation’s history. Now, hopefully, she will rightfully be recognized as a leader in peace and social justice history."--Harriet Hyman Alonso, author of Peace as a Women’s Issue: A History of the U.S. Movement for World Peace and Women’s Rights

Kristen E. Gwinn is a visiting scholar in the history department at Northwestern University. She has contributed to the Encyclopedia of Activism and Social Justice and was an editorial fellow for The Eleanor Roosevelt Papers: The Human Rights Years, 1945-1948.