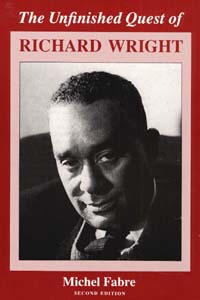 The Unfinished Quest of Richard Wright

Widely acclaimed for its comprehensive and sensitive picture of one of America's most renowned writers, The Unfinished Quest of Richard Wright received the Anisfield-Wolf Award on Race Relations when it was first published. This first paperback edition contains a new preface and bibliographic essay, updating changes in the author's approach to his subject and discussing works published on Wright since 1973.

"A superb and moving biography of Richard Wright which has filled me with elation and pride and has moved me to tears. He has added another dimension to the Richard Wright I knew."--Chester Himes

"A profound and thorough interpretation of his work. It is at once affective and human, very moving and complete. Michel Fabre understands both the man and the writer. I admire the book and feel it is done once and for all, a sensitive and intelligent portrait of Richard Wright."--Anais Nin

"Not only the best Wright biography, but the only good one. It has too long been unavailable."--Keneth Kinnamon, author of The Emergence of Richard Wright: A Study in Literature and Society