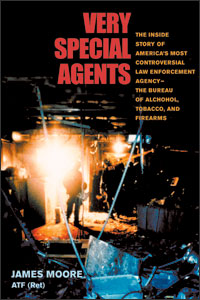 The Inside Story of America's Most Controversial Law Enforcement Agency--The Bureau of Alcohol, Tobacco, and Firearms

A thorough, extremely readable insider account of the Bureau of Alcohol, Tobacco, and Firearms

From Chicago's Al Capone to Waco's David Koresh, the Bureau of Alcohol, Tobacco, and Firearms has taken on America's most ruthless criminals and single-minded fanatics. In Very Special Agents, a longtime ATF veteran delivers the first full disclosure of the bureau's controversial exploits.

When James Moore joined the ATF at Newark, New Jersey, in 1960, it was an arm of the Internal Revenue Service with one job: to catch the Mafia bootleggers whose Prohibition-style distilleries each cheated Uncle Sam of $20,000 a day in tax revenue. During his twenty-five years of service, Moore saw the ATF shift into the enforcement of gun laws, be reborn as a separate bureau, and take on the bombings and arson cases that most officers of the law wrote off as impossible to solve.

From heartstopping undercover sting operations to explosive face-to-face confrontations with mobsters, murderers, bombers, gang members, and terrorists, Very Special Agents takes the reader to the heart of the action. Moore's personal, from-the-hip history of the ATF spans the long-running war against Mafia dons and drug dealers and agents' daring infiltration of the Ku Klux Klan, Hell's Angels, and other groups that advocate violence and bloodshed. He covers the cutting edge forensics work that helped crack the World Trade Center and Oklahoma City bombings, and he provides an insider account of the raid on the Branch Davidians at Waco, Texas. Moore also discusses the ATF's rivalry with the FBI and the bureaucratic hairsplitting and political power games that, in his view, impede the government's ability to short-circuit crime.

Art and Freedom of Speech

The Origin of Baseball's Antitrust Exemption

Too Much Free Speech?