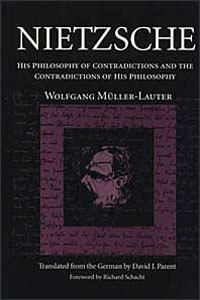 This is the first translation into English of a milestone in Nietzsche interpretation. Wolfgang Müller-Lauter examines Nietzsche's doctrines of the will to power and the overman in light of Nietzsche's philosophy of real contradictions. He shows that Nietzsche's vision of inherently contradictory "wills to power" is the source of irresolvable contradictions in his philosophy.

Müller-Lauter has remained at the forefront of German Nietzsche studies throughout the quarter century since this book first appeared. This long-awaited translation, containing two substantial subsequent essays, is a major addition to the English-language Nietzsche literature.