The athletic triumphs and real-life struggles of the Olympic legend

Born the tenth child of a poor Southern sharecropper and barely able to read or write, Jesse Owens used his astonishing drive and athletic ability to win an unprecedented four gold medals at the 1936 Berlin Olympics. He became an international superstar overnight and exploded Hitler’s myth of Aryan supremacy in the process. This Press edition of the William J. Baker's acclaimed work offers the most complete and probing biography of Owens ever written, vividly detailing the successes and failures of this complex and troubled but ultimately indomitable figure.

"An honest and open account of the life of the legendary Olympic champion."--Multicultural Review

“This book goes far beyond the Jesse Owens of the record books, the legendary winner of four Olympic gold medals and the setter of six world records in a single afternoon’s burst of eternal glory. Jesse Owens delves more deeply into Owens the man and, even more significantly, introduces us to his life before and after his brief term as an unforgettable athlete. It is must reading for all who are interested in the man still regarded by most as the greatest track and field athlete in history.”--Bert Nelson, cofounder of Track & Field News

William J. Baker is a professor emeritus of history at the University of Maine. His books include Of Gods and Games: Religious Faith and Modern Sports, If Christ Came to the Olympics, and Sports in the Western World. 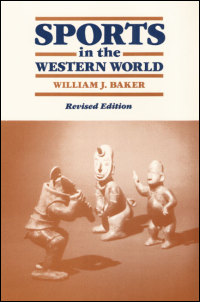 Sports in the Western World