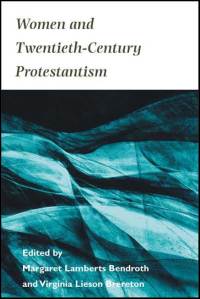 Since the early twentieth century, women's aspirations have taken a variety of forms in Protestant churches, shaped by such forces as feminism, secularization, social activism, and the professionalization of religious work. Giving voice to a broad range of Protestant women, this landmark volume launches a stimulating investigation into the story of women and religion in the twentieth century.

These smart, vigorous essays run the gamut of historical contexts to probe the meaning and impact of social change on women in the church. Contributors consider the emergence of Latina Pentecostal clergy in the United States and the success of the Women's Missionary Union of the Southern Baptist Convention in remaining independent of male-dominated denominational structures. They discuss James Dobson's Focus on the Family, a program closely associated with conservative, fundamentalist values, and ponder its enormous appeal to women and girls. Among other topics, the authors discuss Chinese immigrant women who embraced the relative freedom offered by Protestant religion, turn-of-the-century African American women who assumed religious authority through their historical writing, and the struggles of women faith healers in defining their role amid medical and evangelical professionalism. They also pursue links between a "feminine" preference for nonconfrontational, egalitarian settings and the nature of women's successes and setbacks in their churches.

Women and Twentieth-Century Protestantism demonstrates the variety of women's experience and the breadth of their influence as missionaries, thinkers, activists, theologians, and reformers. This important volume also illustrates the persistence of the "stained-glass ceiling" in constraining women's ordination as well as the increasing disenchantment of many within the church.

"An important set of essays limning many aspects of the role of women in American Protestantism in the late 19th century through the 20th century. This book reflects the recent tendencies in American religious history to modify dramatically the traditional male-centered understanding of American Protestantism. . . . A coherent, lively, and highly suggestive collection of historical essays and interpretations that are must reading for all those interested in recent American religious studies." -- Choice