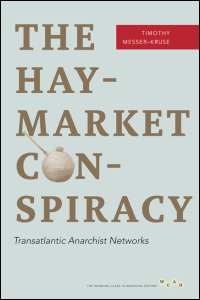 A bold reconsideration of the roots and realities of American anarchism

The Haymarket Conspiracy: Transatlantic Anarchist Networks traces the evolution of revolutionary anarchist ideas in Europe and their migration to the United States in the 1880s. A new history of the transatlantic origins of American anarchism, this study thoroughly debunks the dominant narrative through which most historians interpret the Haymarket Bombing and Trial of 1886–87.

Challenging the view that there was no evidence connecting the eight convicted workers to the bomb throwing at the Haymarket rally, Timothy Messer-Kruse examines police investigations and trial proceedings that reveal the hidden transatlantic networks, the violent subculture, and the misunderstood beliefs of Gilded Age anarchists. Messer-Kruse documents how, in the 1880s, radicals on both sides of the Atlantic came to celebrate armed struggle as the one true way forward and began to prepare seriously for conflict. Within this milieu, he suggests the possibility of a "Haymarket conspiracy": a coordinated plan of attack in which the oft-martyred Haymarket radicals in fact posed a real threat to public order and safety. Drawing on new, never-before published historical evidence, The Haymarket Conspiracy provides a new means of understanding the revolutionary anarchist movement on its own terms rather than in the romantic ways in which its agents have been eulogized.

"A valuable and unsentimental account of a salient episode in labor and leftist history."--American Historical Review

"Scholars must rethink the interior history of the Chicago anarchists in light of Messer-Kruse's revelations."--Register of the Kentucky Historical Society

Very interesting, and extremely controversial: ... It is hard to dispute Messer-Kruse's evidence."--International Review of Social History

"Messer-Kruse has done an immense amount of research for this book and includes a useful explanation of how Chicago anarchists were highly influenced by "propaganda by the deed" European anarchists."--The Journal of American History

"Timothy Messer-Kruse convincingly argues that the Haymarket bombing of 1886 was a conspiracy devised by elements of the Chicago anarchist movement. This even-keeled analysis is a welcome addition to the study of anarchism."--Tom Goyens, author of Beer and Revolution: German Anarchists in New York City, 1880–1914

Timothy Messer-Kruse is professor and chair of ethnic studies at Bowling Green State University. His previous books include The Trial of the Haymarket Anarchists: Terrorism and Justice in the Gilded Age and Race Relations in the United States, 1980–2000.