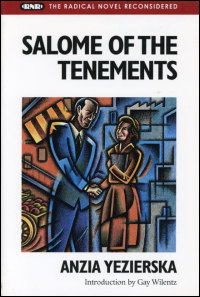 The story of a young, aspiring Jewish woman from the ghetto who will do anything to get her man in this case an upper-class WASP. When she discovers he is not really what she wanted, she will do anything to get away. Based on the real-life story of the Jewish immigrant activist Rose Pastor's fairytale romance with the millionaire socialist Graham Stokes, the novel also reflects Yezierska's own doomed romance with the famous educator John Dewey. Passionate and engagingly sardonic, it criticizes the concept of the American "Melting Pot" in the language of the Lower East Side and exposes the hypocrisy of the "good works" of the privileged class and their so-called dedication to the poor. Gay Wilentz's introduction discusses Anzia Yezierska's life and work.

"One hesitates a long while before applying the word 'genius' to a new author, but it seems to me that there can be no more doubt of the genius of Anzia Yezierska. Salome is one of the most romantic heroines in fiction and her story is one of the few in the yearly deluge of novels that one can never forget."--New York Herald

"Salome of the Tenements is shot through with genius."--New York Tribune

Anzia Yezierska was a sweatshop worker and laundress before becoming a successful novelist. Two of her seven works of fiction, including Salome of the Tenements, were made into motion pictures. Gay Wilentz, an associate professor of English at East Carolina University, is the author of Binding Cultures: Black Women Writers in Africa and the Diaspora.