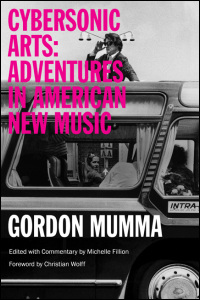 Musicologist Michelle Fillion curates a collection of Mumma's writings, presenting revised versions of his classic pieces as well as many unpublished works from every stage of his storied career. Here, through words and astonishing photos, is Mumma's chronicle of seminal events in the musical world of the twentieth century: his cofounding the Cooperative Studio for Electronic Music; his role in organizing the historic ONCE Festivals of Contemporary Music; performances with the Sonic Arts Union; and working alongside John Cage and David Tudor as a composer-musician with the Merce Cunningham Dance Company. In addition, Mumma describes his collaborations with composers, performers, dancers, and visual artists ranging from Robert Ashley and Pauline Oliveros to Marcel Duchamp and Robert Rauschenberg.

Candid and insightful, Cybersonic Arts is the eye-opening account of a broad artistic community by an active participant and observer.

"A wonderful resource for music and the arts, the book can be read as narrative or used as reference. Highly recommended."--Choice

"As all great books about music lead you to do, I couldn't help but reach up to my CD shelves, where various Mumma discs releases on lables like New World and Tzadik are housed."--Gramophone

"Part memoir of a remarkable life at the center of 20th and 21st century American experimental music, and partly a collection of Mumma's thoughtful, provocative, and influential essays, the book introduces this pioneer to a new generation of sonic explorers"--Electronic Musician

"A contemporary history of a particularly fertile and disruptive time in the advanced arts. . . . Mumma's book bears articulate witness to how this flexible discipline played itself out in concrete situations over the decades."--Avant Music News

"The firsthand histories flowing from this book are precious, provided by one of the unsung heroes of the American electronic music scene, Gordon Mumma. . . . A valuable resource."--Neural

"An excellent and engaging book that can take its readers to a dizzying array of places, real and metaphoric. It is an admirable introduction to the mind and spirit of Gordon Mumma as well as a vivid and loving remembrance of an amazing time in the history of music."--ARSC Journal

"A very wonderful collection of essays, with its first-person witnessing of a scene that was critical for the development of the music technology we have today, and I highly recommend it."--Soundbytes

"What counts here is the spirit of it, the inventiveness springing from an independence of imagination as well as the willingness and financial necessity to work outside the given conditions of the time. Mumma shows us how that spirit is in fact crucial and, always, of essential value."--Christian Wolff, from the foreword

"A treasure trove of primary source material on American, and to a lesser extent Latin-American, music, especially of the experimental kind. The reader is repeatedly struck by the genuineness of Mumma's writing; whether in passages from his diary or accounts of now-significant events, he writes with the authority of one who was actually there."--Bob Gilmore, editor of Ben Johnston's "Maximum Clarity" and Other Writings on Music

"Widely known as a multi-talented composer/performer and inventor of handmade circuits and various forms of electronic wizardry that revolutionized live electronic music, Mumma is far more than the prototypical American 'maverick.' His fierce dedication to his own artistic vision has always been coupled to a voracious interest in the work of the pathbreaking composers, performers, dancers, architects, and visual artists who inhabit his music world and with whom he has often collaborated. This elegantly edited and annotated book is thus not only an invaluable overview of Mumma's extraordinary creative output and ideas, but also an intimate insider’s telling of the history of experimental music during the last half century."--David W. Bernstein, editor of The San Francisco Tape Music Center: 1960s Counterculture and the Avant-Garde

"Mumma's energetic perspectives on so many topics--as a scholar, inventor, technician, performer, composer, photographer, historian, and documentarian--richly enhance our perspective on this period of rapid change and fruitful innovation. A beautiful and much-anticipated achievement."--Amy C. Beal, author of Johanna Beyer and Carla Bley

Gordon Mumma worked for twenty years as a professor of music at the University of California. In 2000, he received the John Cage Award from the Foundation for Contemporary Arts. His wife Michelle Fillion is a professor of musicology at the University of Victoria, British Columbia, and the author of Difficult Rhythm: Music and the Word in E. M. Forster.