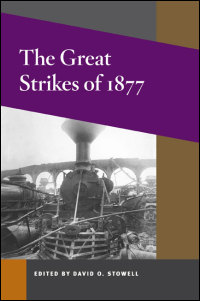 New perspectives on a pivotal moment in U.S. history

A spectacular example of collective protest, the Great Strike of 1877--actually a sequence of related actions--was America's first national strike and the first major strike against the railroad industry. In some places, non-railroad workers also abandoned city businesses, creating one of the nation's first general strikes. Mobilizing hundreds of thousands of workers, the Great Strikes of 1877 transformed the nation's political landscape, shifting the primary political focus from Reconstruction to labor, capital, and the changing role of the state.

Probing essays by distinguished historians explore the social, political, regional, and ethnic landscape of the Great Strikes of 1877: long-term effects on state militias and national guard units; ethnic and class characterization of strikers; pictorial representations of poor laborers in the press; organizational strategies employed by railroad workers; participation by blacks; violence against Chinese immigrants; and the developing tension between capitalism and racial equality in the United States.

"Stowell, author of the definitive Streets, Railroads and the Great Strike of 1877, brings together social historians who examine how the strikes created a shift in the pictorial stereotyping of workers in the pages of illustrated newspapers; the railroad strikes in Hornellsville, New York; how the 'Battle of Halsted Street' revitalized the labor movement in Chicago politics; strike fears and agitation in Memphis, Nashville, and Louisville; details of the strike in San Francisco, where Chinese immigrants were the target; and the effect of the strikes on Hispanic and Mexican-American labor and racial issues in southern California."--C&RL News

"These insightful essays let us glimpse the nation's first responses, its initial stumbling steps in a painful, sometimes bloody process of adjustment that, in many ways, occupies the nation to this day."--Business History Review

“As many historians consider the strikes of 1877 to be the beginning of the organized labor movement in the United States, the lessons learned from this epic can serve to educate activists of today, and Stowell’s work provides a concise guide.”--Labor Studies Journal

"Few events in American labor history are more fraught with significance than the Great Strikes. Bringing our understanding of the events up to date with the latest historiography, The Great Strikes of 1877 is the first volume to assess the strikes' larger implications while also looking closely at their dynamics in particular local settings."--Joseph A. McCartin, author of Labor's Great War: The Struggle for Industrial Democracy and the Origins of Modern American Labor Relations, 1912-1921

David O. Stowell is a project specialist for the Service Employees International Union (SEIU) Local 200 United and the author of Streets, Railroads, and the Great Strike of 1877.